Legal Self Defense Weapons: 3 Everyday Tools That Double As Weapons

Discover the legal self defense weapons you can carry ANYWHERE...even on an aeroplane!  Sidestep the legal minefield and protect your loved ones with the most effective weapon you can carry. 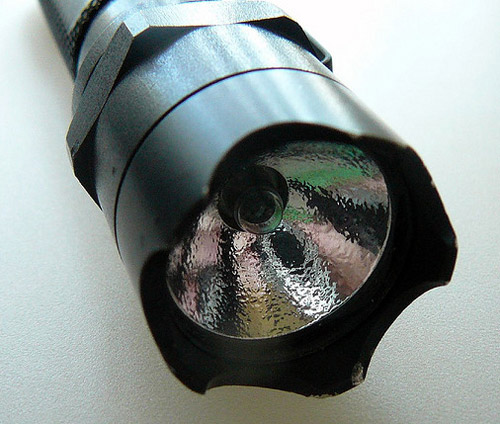 Many people express concern about whether the weapon they want to carry for their own defense is legal in their area or not. It's a valid concern. Staying within the law is often quite a challenge, with the specifics of what you can and can't do often seeming pretty vague.

Fortunately for you, there are certain tools that are legal nearly everywhere, that you can use to defend yourself if you are ever attacked. It'll be up to you to determine whether these tools will fit into the social environment that you live in. I can only pass along the information...

...you need to decide whether to use it or not!

The secret to finding a legal self defense weapon is to choose something that has a normal, everyday use, in addition to its ability to harm another human being!

Fortunately, others in the self defense world have already done the hard work of experimenting with various tools. They've come up with some fairly common items that can serve in the role of both tool and weapon.

These tools are so commonly used by everyone that they aren't likely to draw attention or suspicion to you, even if you live or work in a very "non permissive environment" (NPE). In other words, an environment that does not "permit" weapons of any kind.

Sadly, most corporate environments have very strict policies against carrying weapons. This has forced those of us with a strong survival instinct to become creative and find ways around the rules.

No, I'm not suggesting you carry an illegal weapon to work (if you do, that's your own decision).

Many people prefer to value their lives above a stupid rule in a policy manual. If you truly believe that your risk of being attacked by a criminal is higher than the likelihood of being caught carrying a weapon to work, then you need to make a hard decision.

Such a decision is yours to make, but the consequences of that decision also rest with you...

Legal Self Defense Weapons: Everyday Tools With Other Uses

In my opinion, the items that fit best into the dual roles of weapon and everyday tool are the following:

Most ordinary pens are made of cheap plastic and are not able to withstand the forces involved in bashing a bad guy over the head! 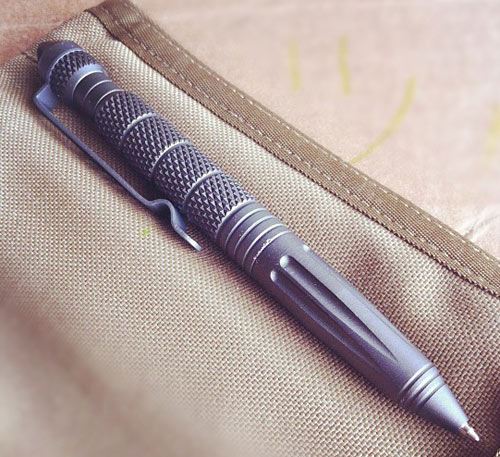 That's why tactical pens are generally made out of tough aluminium or steel and are a bit longer than a normal pen. This length makes it easier to hold onto the pen when you're beating on someone (!).

They also usually have some kind of "knurling" or tooling that makes them less likely to slip out of your hand in a fight (See picture above for an example of this).

Besides all those practical features, most tactical pens actually make really good writing instruments too!

Who would have thought?!

Many models come with the common Fisher Space Pen ink refill that can be bought nearly anywhere if the ink runs dry.

The most attractive feature of these pens (well, SOME of them), is that they don't look like a weapon. The better ones look like an ordinary, high quality pen.

Tac pens come in a variety of colours (Photo by Eddie)

NOTE: I said "some" of them look ordinary. Unfortunately, in an effort to look COOL and TACTICAL, many companies have made their pens look very weapon-like.

Sadly, these legal self defense weapons are unlikely to go unnoticed in an office environment or on an aeroplane. Many people have had their tactical pens confiscated by airport security since they look like some kind of weapon, instead of "just a pen".

I own and highly recommend the CRKT "Tao" tactical pen. The company name (CRKT) is short for Columbia River Knife and Tool. It looks very normal, if a little "fancy". I have worn it in the normal work environment, clipped in my pocket like a regular pen for a couple of years now with no problems.

It looks and functions as a standard pen does, yet it's always there as a great, social acceptable weapon. 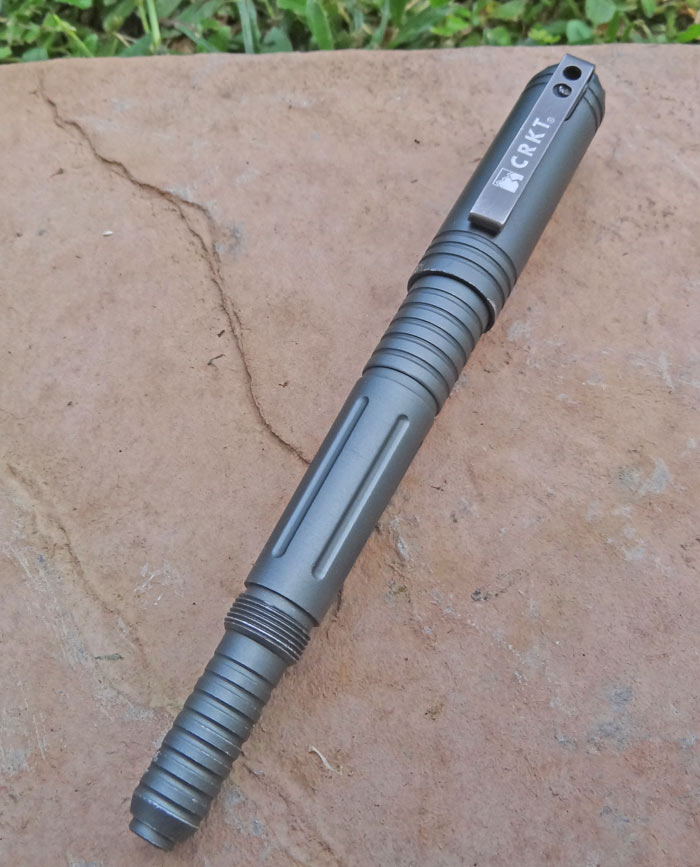 The CRKT "Tao" is affordable and attractive

However, in the end it's up to you to look at the many different kinds of tac pens that are available and choose the one that best suits you and the environment you work or live in. You know best what will look "normal" in the circles you move in and what won't. This kind of thing is very personal and what may work for me won't necessarily work for someone else.

Flashlights have been used in a self defense role for years before the term "tactical flashlight" was ever thought of. Police Officers in many countries carried the "Kel-lite" and more recently, the "Maglite" (Image below). These are large, long flashlights that take 3 or 4 of the big C or D cell batteries. 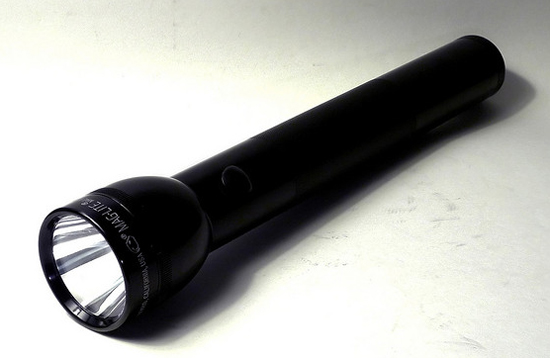 These flashlights typically have a strong aluminium body and can be (and have been) used very effectively as a club. Policemen (and women) would hold the light up by their shoulder when speaking to a suspect on the street at night.

In this position, it's easy to simply swing the light downwards to strike the suspect should they start to attack the officer.

Modern tactical flashlights are usually much smaller in size and weigh very little. Many come with a pocket clip or a hole to attach a lanyard. They also use smaller, lighter lithium batteries that last longer than regular batteries.

These little flashlights are BRIGHT! 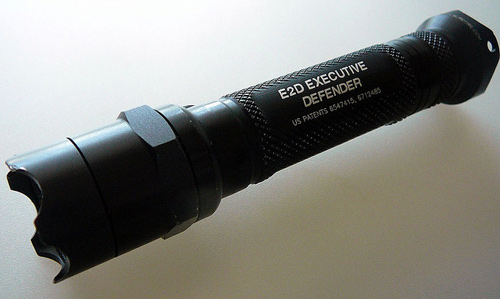 The E2D tactical flashlight made by Surefire (Photo by Mr. Smashy)

They do an excellent job of lighting up the dark areas around your car when you are walking back to it in a dimly lit parking lot. Some of them are so bright they can be used to temporarily blind an attacker (don't rely too heavily on this effect though, as it may only last a second).

In addition to the positive features already mentioned, tactical flashlights are made from strong aluminium or steel and are able to withstand being used to strike an attacker.

This means they can serve as an effective weapon when held with the bulb end sticking out of the bottom of your fist. You simply hit someone in a "hammer fist" motion.

That same motion would be most effective if used against a criminal attacker's face or head. Think about it. I wouldn't want to be hit with one of these things!

Canes As Self Defense Weapons

Canes or walking sticks have been carried and used as weapons for thousands of years. Many of the oriental martial arts practice with wooden canes and practitioners can learn to be very deadly with them.

More recently, William Fairbairn, who trained the American and British soldiers in Close Combat during World War 2, taught them to use a stick about the length of a cane to kill Germans. This was taught to them in case they somehow found themselves without a firearm. 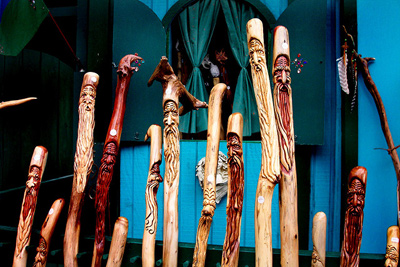 Canes can be had in many wonderfully ornate designs (Photo by LadyDragonflyCC - >;<)

For us civilians in peace time, canes still have a useful role as a truly legal self defense weapon that flies well under the radar. I think you would have little difficulty carrying a wooden walking stick onto an aeroplane or into an office building without undue suspicion.

The only real drawback to this legal self defense weapon is that younger people may struggle to pull off carrying one without people giving them some funny looks. If you can pretend to have (or you really DO have) a knee injury or limp, you may have an easier time making it look natural.

Some younger self defense minded folks have just made it their goal to figure out a way to blend in while carrying a cane.

With the right attitude and a bit of practice, I believe it can be done. 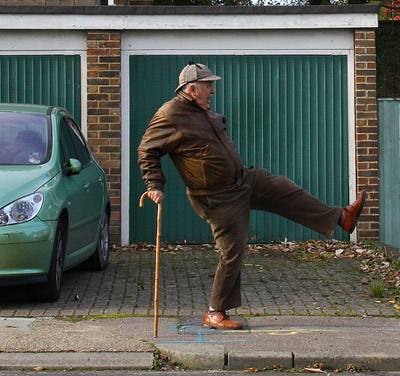 If you're a bit older and wiser (hopefully!), then this shouldn't be difficult at all. The only thing is you'd have to get used to carrying something with you that you may not have had to carry before.

If you're committed and serious about being armed with a very effective yet innocent looking weapon, then you'll find a way to make it work.

A Life Saving And LEGAL Choice

If you live in a country or area that doesn't legally allow you to carry conventional weapons such as knives or guns, then these ordinary, everyday tools may be ideal legal self defense weapons for you.

Take some time to try out the ideas in this article, and you may find that they change the way you think about self defense weapons altogether. I certainly see the value of such items and frequently carry tactical pens and flashlights, since they make sense for my situation.

Perhaps you can do the same.