Tap into the remarkable power of non lethal weapons. Compare the bottom line benefits of these simple tools for getting you home safely. Being faced with violence doesn’t always mean guns and knives are involved. Thankfully, the situation is usually not quite that serious! Having a less...”permanent” solution (!) to your problems is often exactly what you need. 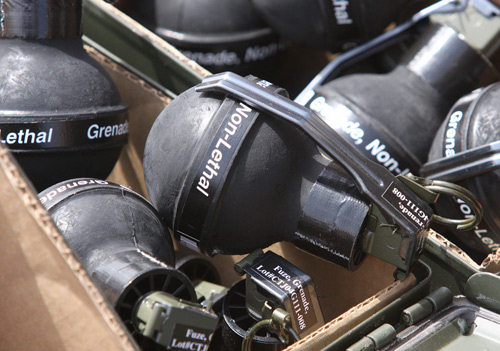 Note: The law of your country may be different from mine. Click here to read my "mini-disclaimer" about weapon laws, then come straight back here!

As the name suggests, non lethal weapons are ones that are not likely to kill or permanently injure an attacker. There are many good reasons for you to consider carrying such weapons.

As I discuss these kinds of weapons, you need to realize that there will always be a balance that has to be considered.

A weapon that is too "safe" or "gentle" is not going to be effective at stopping a criminal attacker. On the other hand, if a weapon has a very high likelihood of killing the criminal, then it can't really be called a non lethal weapon anymore. It's simply a "weapon" (the "lethal" part is implied)!

Some of the most common ones include:

Of those examples, only the pepper spray and the stun gun are TRUE non lethal weapons. The others CAN cause someone's death if they are used to strike to the head repeatedly.

However, if they are only used to strike the body or the arms and legs of your attacker, they can be used as a non lethal weapon.

A comforting fact (well, it's comforting to me!), is that truly life threatening situations such as hijackings, rapes, home invasions and robberies are actually quite rare.

If you encounter a criminal attacker, it's far more likely to be a LESS serious situation. That doesn't mean that you can't get hurt.

It simply means that not every situation is a deadly one.

There are many potentially violent situations that can be solved very effectively with a good dose of pepper spray, the sharp shock of a stun gun or a strike from a telescopic baton:

The real beauty of non lethal weapons is that they give you the luxury of OPTIONS.

Abraham H. Maslow said: "I suppose it is tempting, if the only tool you have is a hammer, to treat everything as if it were a nail."

In other words, if all you have is a gun, you may think it will solve every violent situation you face. This kind of thinking can get you in trouble with the law.

If the situation is not deadly, using a firearm won’t be appropriate. But using pepper spray, or a telescopic baton might be just the thing to let you get away from the danger and home safely.

Of course, I think the best option is to carry a non lethal weapon, as WELL as a deadly weapon such as a knife or a gun. That way you will have the right tool for the job, whether it’s a life threatening situation or a less serious one.

Why Carry A Non Lethal Weapon? 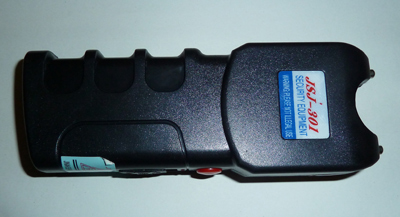 A Stun Gun (Photo by ukhomeoffice)

This is a good question to ask yourself if you are considering carrying one of these (or if you already do).

The answers are not as obvious as you may think.

Many people carry a non lethal weapon, such as pepper spray, for one of the following reasons.

There are some problems with these reasons which are worth talking about if you want to have a realistic chance of surviving a criminal assault.

Reason number 1 is fine, IF they realise that they may be in serious danger if their pepper spray doesn't work on the bad guy (as I mention below, it doesn't work on everyone!).

Reason number 2 and 3 are dangerous, since the person hasn't given enough thought to what might happen in a criminal attack.

They are setting themselves up for a tragedy!

It's understandable that many people are hesitant to carry a deadly weapon such as a knife or a gun. Very few people actually WANT to hurt or kill another person, even if they are a criminal.

What If It Doesn't Work?

What they may not have considered, though, is that not all criminal attackers will be stopped by a non lethal weapon like pepper spray.

A certain percentage of attackers will not be stopped by these weapons.

Criminals who may be able to fight through the pain may be:

There are many cases of policemen using pepper spray on a criminal suspect only to have the criminal simply LAUGH at them and continue attacking.

Some bad guys even wipe the pepper spray off their face and lick their fingers!

In the same way, even a stun gun may not always work. It is official policy in most American police departments to ALWAYS have an armed policeman standing by, ready to use deadly force on a suspected criminal if the non lethal weapon doesn't work.

They understand the need for a backup option.

What if you are about to be attacked by a large, muscular criminal and he simply laughs at you after you've sprayed him in the face with your pepper spray?

Do you have a backup plan? What will you do next?

...or it may just mean that you turn your back on a dangerous criminal who then shoots or stabs you in the back!

Running away may work, but only if you are faster and fitter than he is.

Can you know that for certain?

Do you still want to "just run away"?

Carry One But ALWAYS Have A Backup Plan

I happen to think it's a very GOOD idea to carry a non lethal weapon, but...

... ONLY if you have given serious thought to what you will do if it doesn't work.

Here are some options that I think are reasonable. I've listed them in order of preference, from the BEST to the WORST option:

Sometimes a non lethal weapon is NOT the answer

There are times when you would be making a huge mistake by pulling out and trying to use your non lethal weapon.

If there is a criminal standing in front of you, gun pointed at your chest, demanding your money...

...it's NOT a good time to pull out your pepper spray!

If you are being hijacked by armed criminals, it's too late to be playing around with these kinds of weapons.

In a hijacking situation, your options are:

That last option will always be a dangerous one, but if you KNOW that you will die unless you do something drastic, then you’ll have to take your chances. Better to die fighting back than to just give up and be killed for nothing!

Please understand that option number 2 (just doing what they ask) is NOT always the safest option!

MANY South Africans have been shot and killed even AFTER doing everything the criminals asked them to do. Some hijackers just want to kill someone, and they don't need a reason to do so.

That's the real danger in these situations. You can never know exactly what the criminal is thinking.

Give Them Some Careful Thought First

My opinion is that these weapons are worth carrying, but you need to be sure that you fully understand their role in your self defense plan.

Simply shoving a can of pepper spray into your pocket or handbag without any plan or mental preparation will give you a false sense of security.

It may even make you MORE vulnerable to criminals!

Mini-legal disclaimer notice: Before you read and follow the advice in this article, I need to mention the law. Even though I am writing these words from South Africa, this website is read by people from a number of different countries around the world.

Every country has its own laws about carrying and even owning weapons for the purpose of self defense. It's up to each of you to find out what your country allows and then follow those rules. The advice and opinions on this site are not to be regarded as legal advice.


Return to beginning of article