Master these powerful Krav Maga moves so you can dominate your opponent. With these simple techniques, you’ll be calm and confident in the face of an attack.

There are a huge number of moves in this effective fighting system, but only a few are worth spending a lot of time on. I'll be covering the 5 techniques that I believe are the most powerful.

But first, a bit of background. Krav Maga, as a fighting system, was started by Imi Lichtenfeld who later taught it to the Israeli Defence Forces (IDF). Apparently, they worked with the ideas he passed on to them and made it into the fighting system they use in the Israeli military today. It's also used by the Israeli intelligence group called Mossad.

I spent a short while learning some Krav Maga moves at a class in my area. It was held in the evenings and there were about 10 or 12 of us taking part. The instructor was a very fit and friendly fellow who was clearly highly capable of inflicting pain!

The first class was an eye opener for me!

Krav Maga puts a pretty big emphasis on physical fitness as a way to enhance your ability to fight effectively. I believe this factor varies slightly depending on the group you train with, but it was definitely a LARGE factor in this group!

Fortunately, I was able to cope with most of it, but I was certainly challenged. The instructor first led us in practicing some punches and kicks, first in the air and then against large pads held by our partners. There was very little rest in between the different techniques, so my heart rate stayed high the whole time.

I felt that some of the techniques that were shown would not be the best to use in a real self defense situation. What I'm referring to are certain kicks to targets ABOVE the waist (high kicks are risky to try, since you may easily lose your balance and then be at a major disadvantage to your attacker). I was also taught some turning / twisting kicks that involve you turning your back on your opponent for a split second.

From everything I've learned over the years, purposely turning your back on a violent adversary at ANY time during a fight is a BAD idea. You leave yourself vulnerable to so many things, including being stabbed in the back or simply being grabbed while you aren't watching your attacker.

Nevertheless, here are 5 great Krav Maga moves that can be relied on when you're alone at night on that dark street facing a frightening criminal attacker who seems to be determined to end your life. 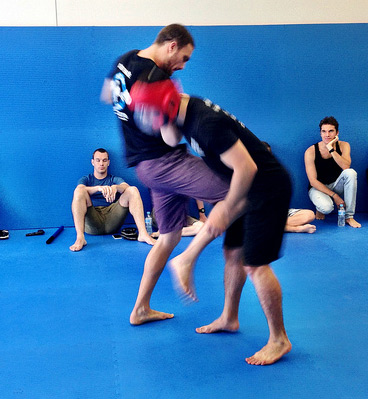 I really enjoyed practicing the Krav Maga knee strike against a training partner holding a strike pad against his lower chest area. The amount of POWER even I could produce had him wincing and gasping for air a few times!

I say "even I" because I'm not a very large or muscular person, but I was still able to hit him pretty hard. If he didn't have the pad, it would have hurt him quite badly, I'm sure.

Krav Maga teaches you to grab hold of both sides of the bad guy's neck with your hands, pulling him down firmly as you thump your knee up and into his solar plexus or stomach area. You can also aim for the ribs on either side or the chest, if you can pull him down low enough.

The idea is to knee him repeatedly until he goes down or is unable to harm you anymore.

As with many good martial arts, Krav shows you how to use the tough, body parts of your body as weapons against the soft, squishy (!) areas of your assailant's body. This gives you the best chance of hurting him and getting him to stop attacking you. 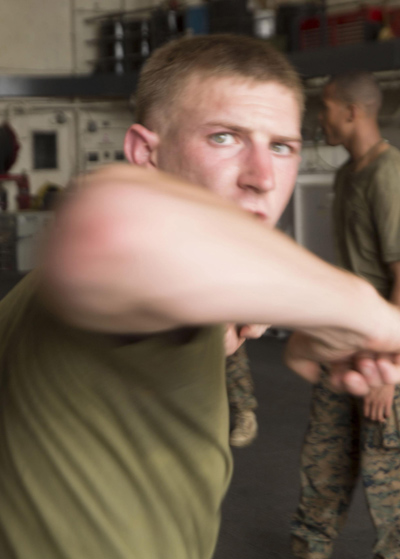 The elbow strike is a one of my favourite Krav Maga moves (Photo: U.S. Naval Forces Central Command/U.S. Fifth Fleet)

The elbow can be used in several ways:

You must always remember to follow up this strike, and any other kind of strike, with other Krav Maga moves. You can repeat the same technique, such as an elbow, over and over again until your assailant is down on the ground or change to another technique. Just be aware that it's often easier and more effective to simply keep doing something that is working, rather than changing to something else mid way through the fight.

The palm strike is a very powerful and easy to learn Krav Maga move. It is common to many other fighting systems for one simple reason, it works! This one can be used exactly like a boxing punch, except, instead of punching with a clenched fist, you'll open your hand and hit with the meaty portion at the bottom of your hand, right near your wrist. 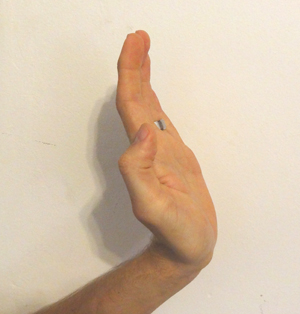 This is a strong area that won't get hurt easily from hitting bony parts of your opponent, such as their chin or skull.

Aim this strike up and directly under the chin of the cretin in front of you. Follow through by pretending you are trying to put his head through the roof and you'll probably knock him unconscious. This is a VERY powerful and effective move. It does not require a lot of strength to knock someone out, as you're pushing the chin straight up, which kinks the back of his neck very suddenly.

The head is the best target for this strike as well as many other Krav Maga moves. It can be used against the body too, but the shape of the open hand makes it less suitable for this purpose. If you plan to hit the guy in the body, rather use a clenched fist. However, choosing to use a palm strike whenever you hit the head will also protect your knuckles from being broken or damaged by your opponents teeth. Who knows when last he brushed them! Yuck! 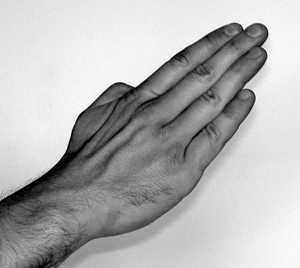 The knife hand strike is another of the Krav Maga moves that is commonly used in other martial arts for the same reason as the palm strike: its extreme effectiveness.

The way to form a knife hand is quite simple and you've probably seen it done in movies before. Just extend your fingers like you are about to shake someone's hand, but keep your thumb against the index finger instead of holding it upright. Tighten your fingers and wrist when you strike with it and make sure to hit with the meaty part at the base of your little finger near the wrist.

This is the toughest part of the hand (aside from the bottom of the palm, used for the palm strike). Make sure you don't make the mistake of hitting your attacker with your pinkie (little) finger, or you may break it! You also won't be able to hit with any real power using that part of your hand as the impact point. It will simply give way under the force of the blow.

This Krav Maga move can be directed against almost any part of his body, but either side of the neck, the sides of the head and the front of the neck (throat area) are excellent targets. If you are behind him, or he is bent over in front of you, the back of the neck, near the base of the skull is a good target. 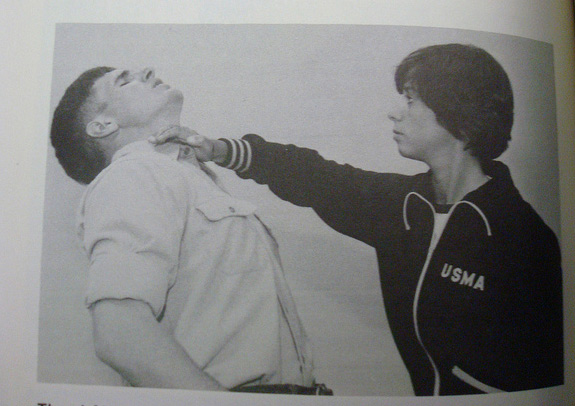 The knife hand strike is one of the potentially deadly Krav Maga moves (Photo: MadAdminSkillz)

Knife hand strikes can also be used to chop a goon's forearms if he tries to grab you or even if he has already grabbed you. If he's holding on to your other arm, for example, you can chop the top of his forearm with the edge of your hand to get him to let go.

Immediately follow this up with a sweeping knife hand strike to the side of his neck or head. Remember to continue hitting him until he is down or otherwise no longer trying to hurt you. Don't just stop and look at him after hitting him once! He'll probably come straight back and attack you again. Be relentless in your attack on him. After all, if this is a self defense situation, he started it by becoming aggressive with you first. You are only responding to his actions.

Lastly, learning to fall in a way that doesn't result in broken bones is a valuable skill to have. You may think it strange to try to fall on purpose, but as long as it's practiced on padded foam mats or soft grass, there's no harm in it.

There are several different types of breakfall:

What they all have in common is that they teach you to fall in a controlled way so you don't get hurt. When learned and practiced to the point of them being automatic, you can rely on your body to go straight into the correct breakfall without even thinking about it when the time comes.

I have been absolutely amazed at how effective these Krav Maga moves are for protecting you when you fall accidentally. I was once riding my mountain bike down some stairs (don't ask!), when suddenly my front wheel jammed and I found myself flying over the handlebars.

Without any conscious effort or thought on my part (it happened so quickly), I tucked my body into the perfect forward roll and ended up in the standing position again. I felt like some kind of super hero and quickly looked around to see if anyone was watching!

The reality is that despite falling on a hard, concrete surface, I had no real injuries except for a tiny scrape on my knee. I did not hit my head on the ground or injure my back. All this happened BEFORE I started regularly wearing helmets while cycling (I know, I know), so I was extremely grateful that I had learned to breakfall years before.

This is a good Youtube video demonstrating how to do a breakfall. This particular one is from the martial art of Hapkido, but the principles for the Krav Maga version are the same.

Be Sure To Practice These Moves Often

I would suggest to anyone who is interested in learning self defense or martial arts to check out a Krav Maga training group near you. Just be aware that some groups are better than others. As with many types of physical training, the quality of the instruction depends on the instructor's ability to perform the moves AND his ability to teach.

There are many instructors out there who are exceptionally capable fighters, but very poor teachers. That's a recipe for disaster if you are there hoping to learn to protect yourself from violence. Choose wisely!