Hit first to avoid being rapidly overwhelmed by your attacker. I’ll help you to grasp the mental side of the Pre Emptive Strike to maximise your effectiveness in any violent encounter. If you’re new to this idea, it may seem unfair or even criminal to attack first. In fact, it's the best way to improve your chances of surviving a criminal assault. 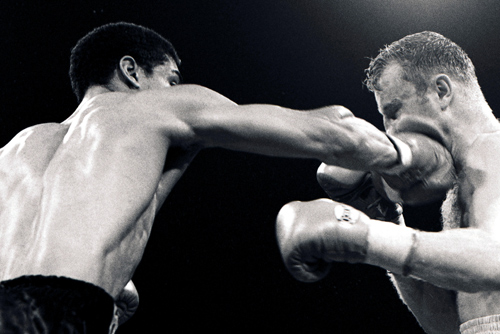 A devastating punch to the jaw (Photo by J L Sherwood)

If you wait to get hit or stabbed or shot first during a criminal attack, you probably won't survive long enough to recover and fight back!

To people who work in jobs where they face violence every day: policemen, bouncers, soldiers and security personnel, the pre emptive strike just makes good sense.

Most of these people learned early on in their careers that if you don't choose to be first with your punch or takedown, the other guy (criminal or enemy soldier) is going to take the initiative.

In other words, he will not wait for you to get yourself ready. As soon as he feels he has the advantage, he will hit first.

In the real world, that means the good guy is about to have a very BAD day indeed!

Bouncers And Doormen Use The Pre Emptive Strike 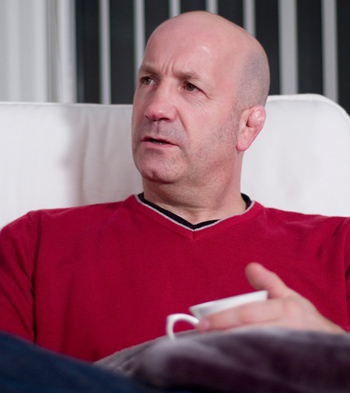 The self defense world was taken by storm when Geoff Thompson, a British nightclub doorman (bouncer) published a book called "Watch My Back" in 1992 (Read a review on this book).

In it, he described his 9 year career as a bouncer. He said that the single most important strategy that he used in every fight that he was ever in was to hit first and keep on hitting until the other guy was on the floor.

The idea of using a pre emptive strike was not a new concept to those working in violent jobs around the world.

However, to the self defense community, many of whom had been trained to wait for their opponent's attack, block and then hit back, this was something interesting.

This idea went against what many had been taught in Karate and other martial arts. Many people were angry and thought that hitting first was "unfair" and wrong.

Misunderstanding The Nature Of Real Violence

Most of those who thought Geoff Thompson was wrong or "unfair" to teach people to use the pre emptive strike misunderstood the context that Geoff was operating under.

In a real violent situation, such as a street robbery, mugging or assault, there is a HUGE risk in waiting for the bad guy to make the first move.

Realize that I am not talking using a pre emptive strike in some childish, school yard "fight". There is more at stake in a real violent situation than a split lip and hurt feelings.

By hitting first, I mean not only hitting with your fists (although you may want to do that), but I am also talking about:

...Or being the first to use any number of self defense weapons.

Of course, you would only do any of this if you knew that your life really was in danger and that you had a legal right to defend yourself.

If you are facing a man armed with a screw driver who is demanding your wallet...

...your life is definitely in danger, so hit first!

If you are about to be pulled into a vehicle by two large, muscular criminals (kidnapping)...

...your life is definitely in danger, so hit first, using whatever weapon you have!

The One Punch Knockout 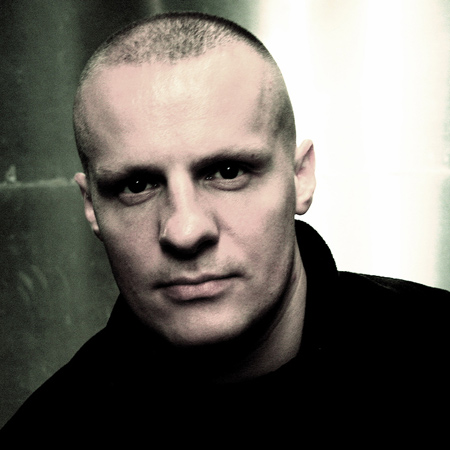 Geoff Thompson was in 300 fights during his 9 years as a nightclub bouncer, and he used his pre emptive strike (a simple right punch) to knock out just over 50 of his opponents!

Most of these knockouts were from a single punch to the other guy's chin!

While you may not think yourself capable of doing that (it is quite possible with a bit of training), it shows how viable the strategy of hitting first is.

By being first, and not waiting to get into a long, drawn out fight with these people, Geoff was able to defeat many opponents who really wanted to hurt him.

Many of these men:

Despite all of these factors working against him, he was still able to win all those fights for one reason...

...he decided to hit them first, before they had a chance to use their superior size or skills against him.

You Will Probably Be Outmatched By Your Attacker

The reality is that the person who chooses to rob, attack or hurt you on the street probably has more experience with real violence than you do.

Life on the streets is tough!

As a criminal, this person may have:

Are you really willing to risk LETTING this person take the first shot?

Are you willing to take a chance and HOPE that you aren't knocked unconscious or even killed by that first punch, stab or bullet?

That's why I've spent many hours preparing myself mentally and physically to use a pre emptive strike in any violent situation I may find myself in.

I feel completely comfortable morally and ethically with this choice.

I feel fine about it because I know that I do not start fights with people for no reason. I do not threaten or try to scare others into doing what I want. I am not the kind of person who uses violence to get my way.

That means that if somebody is in front of me, threatening to hurt or kill me, it won't be because I started the fight. It's only likely to be a true self defense scenario, where my safety or even my life is in danger.

In a situation like that, I am fully prepared to strike first using the most effective tools at my disposal. If the situation is serious enough and I feel that my life is in danger, that first strike will probably be with one of the knives that I carry.

If the situation is less serious, such as someone trying to fight with me outside a bar or nightclub, my pepper spray would be my first option.

Your response to violence should always make sense given the situation you are facing. It wouldn't make sense to shoot someone who is not armed and is "just" trying to start a fight with you.

But, if you are facing someone who is trying to kill you, your little can of pepper spray is not the right answer either! Something a little more dangerous is in order.

No matter whether you are a large, muscular man with actual fighting experience or a mother who just wants to protect herself and her children from harm...

...using the pre emptive strike should be part of your defensive planning.

It will allow you to gain the advantage in a dangerous situation and turn the situation around in your favour. By really embracing this idea, mentally and emotionally, you will drastically improve your chances of surviving a violent criminal attack.

Do yourself a favour and HIT FIRST!