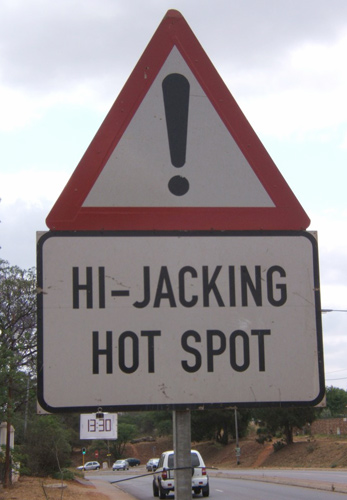 A sign in Johannesburg, South Africa (Photo by Herby Hönigsperger)

Raise your awareness of the tactics used by criminals in hijackings. Absorb these sure-fire techniques to protect yourself and your loved ones from danger.

Also called a "carjacking", this is a very common crime in South Africa and in many other countries of the world. It happens when a criminal or gang of criminals (more likely) use violence or the threat of violence to steal a victim’s car.

They happen in all the major cities in South Africa, but Johannesburg is the worst of all.

This kind of crime most commonly happens in one of two places:

Criminals use many different methods of attack. Here are a few methods that are used in South Africa:

Method Of Attack #1 - Outside Your Home

A car full of hijackers parks behind the homeowner's car as he is waiting for his home's electric gates to open. Once trapped, they (usually 3 to 5 of them) jump out of their vehicle armed with handguns.

Each of them may stand in a certain position around the car (one in front of car, one at passenger window, one at driver's window) pointing their guns at the people inside. The victims will be shouted at, threatened and forced to get out of the vehicle.

Often they also steal the victim's wallets, handbags, jewellery and cell phones. Once the victims are out of the car, the hijackers jump in and drive away. One of them will be in charge of driving away in the car that they arrived in.  The whole procedure takes only seconds.

Method Of Attack #2 - At The Traffic Lights

Another method is for them to pretend to be beggars or sales people at the traffic lights of a road intersection. They usually target a car at the front of the line of vehicles. This is to make sure they can drive away quickly once they have taken control of the car.

When they find a driver who is not paying attention or who seems to be frightened of them they may decide to hijack them.

To do this, they pull out a firearm and point it at the driver through the window (if the window is open this is even easier and more frightening). They shout and threaten to kill them if they don't get out. Once the driver opens the door, they are violently pulled out of the vehicle. 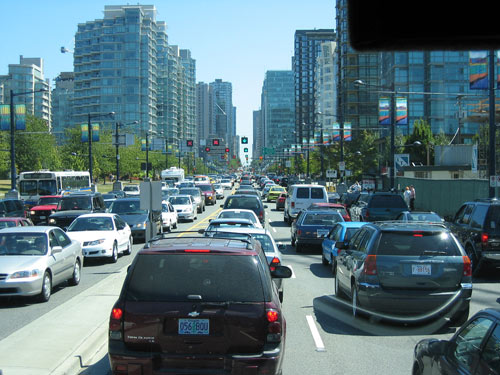 IF they are lucky, they may not be injured.

Unfortunately, it's all too common for the victim to be shot or hit with the butt (handle) of the handgun even if they do EXACTLY as the hijacker instructs. Some of these criminals are sadistic and simply want to hurt someone.

Once in the vehicle, they charge through the intersection at high speed to make their escape.

This last one also happens at traffic lights. If a person is sitting in their car with their window open (perhaps it’s a hot day or just out of habit), the criminal may approach and ask for something. For instance, some change, a cigarette or a match.

The idea here is to distract the driver by engaging his mind with a question.

As soon as they are distracted by the question, or even when they look down to get the cigarette, they are punched in the face!

The purpose of the punch is not (usually) to knock the victim unconscious, although that may happen. The real reason for this is to give the person a huge fright and give them an adrenaline dump.

As soon as the crook has landed that strike, they rip the door open, pull the driver out of the front seat and jump into the car. Then they drive away as quickly as they can, leaving the dazed victim lying in the middle of the road.

Don't underestimate the devastating effect that this crime can have both physically (in terms of injury or death) and emotionally (psychological trauma).

Survivors (a better word than "victims") of hijackings are often left highly traumatised by the crime.In fact, many go on to suffer from Post Traumatic Stress Disorder (PTSD).

This disorder is the same one that affects many soldiers who have had terrible experiences or have witnessed too many horrific scenes on the battlefield. Survivors (of war or criminal violence) who suffer from PTSD may benefit from the help of a clinical psychologist and/or medication.

Unfortunately, too many survivors are resistant to the idea of getting this kind of help. Some go on to suffer in silence and desperation for years. With the highly effective modern treatment and medicines available these days, this is a real shame, and completely unnecessary.

Other survivors of hijackings are left with permanent disabilities as a result of brain or spinal cord injuries that they received during the attack.

As I mentioned before, hijackers are often quite cruel and can become violent for almost no reason at all.

There have been many cases in the newspaper here in South Africa where a victims were shot AFTER they had been pulled out of the vehicle and no longer posed any threat to the criminals at all.

Some criminals may simply want to feel what it's like to seriously injure or even kill someone.

What Can You Do To Prevent It From Happening To You?

The main defenses against this shocking crime are:

Leaving a gap like this will let you turn the steering wheel hard to the right or left and accelerate away from the danger. If you are too close to the car in front of you, you may be trapped!

Keep your eyes open whenever you are sitting in your vehicle in traffic. It takes only seconds for a hijacking to change your life forever! Don’t be a victim!

Interestingly, having a self defense weapon like a handgun or a knife may not be very much use in this situation.

The most effective thing you can do if you believe you are about to be hijacked is simply to move the car out of the danger area as quickly as you can. JUST DRIVE!

Stay Safe On The Roads

It used to be the case that the only thing you really had to worry about on the roads was other drivers and the possibility of a crash.

Some cities and regions are more dangerous than others, but it makes sense to be mentally prepared for this type of crime with a plan of action.

Knowledge of how these attacks actually happen is your best defense against them.

Ignorance of the reality of this crime is really unacceptable these days. Make sure you know what you're up against and think about your options. It's not good enough to just believe...

"It will never happen to me!"