Grasp the realities of going armed every single day. Learn about the practical issues I faced while carrying weapons for the last 10 years of my life (as of 2015), so you can be prepared. After much thought and reading, I recognised that always having a weapon on my person would allow me to defend my life in situations where my bare hands might not be enough. 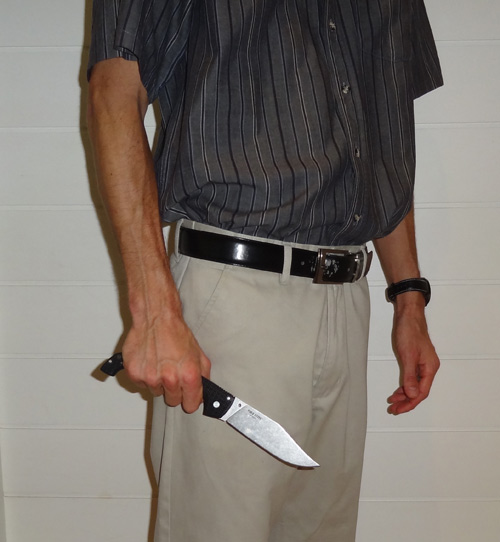 ...then having a weapon and knowing how to use it well could save my life.

Of course, I would only consider using the weapons that I carry if I felt that my life was in real danger. In other words, if I knew I was in a "deadly force situation".

What your country's laws say about what you may and may not legally do in a deadly force situation may differ from mine (South Africa). Be sure you know what your legal rights are before you implement any advice or information I give about weapons.

The Weapons I Carry

I have carried a variety of different weapons over the last few years. This was mainly because I was experimenting and constantly learning new things from various helpful online forums such as Total Protection Interactive and WarriorTalk.

(See my page about "Self Defense Weapons" for more info on some of these weapons.)

At various times I carried several of these at once. For a long time I carried two Spyderco knives (an Endura and a Delica), one in each pocket of my pants. The reason behind that was so that I would be able to draw one of them even if my other hand was injured or actively engaged in holding or fighting with an assailant.

Regardless of the combination of weapons that I have carried, I have had at least one knife within arm’s reach of me pretty much 24 hours of every day for the last 9 years (excluding times such as on aeroplanes, at certain events with metal detectors and some work situations).

Why Carry Weapons ALL The Time?

This is a question that people sometimes ask me.

My reasons are simple.

I have decided to carry weapons because I believe they may one day enable me to survive a serious criminal attack. Since I don't know when such an attack might happen, I realised I needed to carry my weapons with me ALL THE TIME!

How stupid would I feel if the one day I decided to leave them at home, I got attacked by 3 armed criminals? It would be such a waste of a life!

Some people have some strange ideas about carrying weapons. They seem to believe that they will somehow know when they will need a weapon and when they won't. Since they feel this way, they only carry their weapon on certain days or when they are going to certain "dangerous" places.

If I knew for certain at what time and place I was going to need my weapons, I would sure as heck not be there! I would stay at home and keep myself locked inside all day, safe and sound.

But I don't know when (or even IF) I will be attacked by someone who wants to seriously hurt or kill me, so I stay prepared at ALL TIMES, just in case.

Especially in the early days of carrying weapons, there were several mental aspects that I had to get used to.

For example, when I first went out in public with a concealed weapon (in my case, it was a small pocket stick or “Koppo” in my right pocket)...

It felt almost like I was doing something I shouldn’t be doing!

Of course, that was just years of subtle social conditioning that told me that “only criminals carry weapons” or “why do you need a weapon?”

At times it felt like I had a dangerous “secret” in my pocket. After a few weeks these feelings faded away and were replaced by a good feeling. I felt good about having an effective tool to protect myself with.

I knew that with this weapon close at hand, I had something that would enable me to surprise an attacker and really injure him if I needed it.

Being the responsible and calm person that I am, I never considered using my weapon in anything but a actual deadly self defense situation. I know there are people out there who may have felt the temptation to abuse their new found “power”.

During this entire time that I was carrying weapons, I was reading huge amounts of advice and information on those forums I mentioned earlier (TPI and Warriortalk, among others). Many of the members of those forums are ex-military, police officers or self defense enthusiasts. Most of them are very experienced and knowledgeable about the subjects of self defense, weapons and violence.

Some have spent years dealing with actual violence and criminals first hand. As such, they were able to give truly valuable advice on what to carry, how to prepare mentally and physically for a self defense incident and even what clothing to wear while carrying weapons.

After much thought and reading, I felt ready to buy my first self defense knife. I bought a small folding knife called a Spyderco Delica based on the recommendations of many people on those forums.

Almost all modern folding knives come with a pocket clip that allows you to carry them very easily. My new Spyderco was no exception.

I first thought that everyone would notice this little black clip sticking out of the right pocket of my pants and ask me what is was. This concerned me a bit, since I didn’t really want everyone to know I was carrying weapons.

I needn’t have worried!

I learned then that most people are not very aware of their surroundings (See my Awareness page). In fact, nobody, not even my close friends noticed my knife for months. When they did, a few of them were quite interested and thought I was crazy for carrying a knife!

I didn’t let their opinions get to me though.

I knew then as I do now that by carrying weapons, I am giving myself a fighting chance should I ever be faced with somebody trying to kill me. I will quite happily deal with a few snide comments from ignorant people if it means I survive a potentially deadly attack one day.